Medusavirus, a giant virus, is more closely related to eukaryotic cells than other giant viruses are. In an exciting new study, scientists from Japan have used electron microscopy and time-course analysis to discover four different types of medusavirus particles within and outside infected amoeba cells, representing four different stages of virus maturation. Their results indicate that the medusavirus has a unique maturation process, providing new insights into the structural and behavioral diversity of giant viruses.

Giant viruses represent a unique group of viruses that are similar in size to small bacteria. Medusavirus―a special type of giant virus―was first isolated from a hot spring in Japan. Interestingly, genetic studies showed that medusavirus was more closely related to mature organisms called eukaryotes than to other giant viruses, suggesting that it may hold the key to understanding eukaryotic evolution. Although the details of medusavirus morphology and maturation in infected cells have so far remained elusive, the researchers behind its initial discovery now have some answers.

In a recent study published in Journal of Virology, a team of Japanese scientists led by Prof. Kazuyoshi Murata from the National Institutes of Natural Sciences and Prof. Masaharu Takemura from Tokyo University of Science has revealed, for the first time, a unique four-stage maturation process that the medusavirus undergoes within host cells. Prof. Takemura comments, “From an evolutionary perspective, the medusavirus is extremely interesting, as its replication process and genome are different from those of other viruses. Interestingly, medusavirus also has a unique particle structure. In this study, we wanted to make additional inroads towards elucidating the biology of this virus by characterizing its morphology and maturation process.”

To do this, the researchers used two techniques that allow the high-resolution visualization of viral infection―conventional transmission electron microscopy (C-TEM) and cryo-electron microscopy (cryo-EM). Using these techniques, they observed the detailed particle morphology of medusavirus in infected amoeba cells.

Subsequently, they performed time-course analysis, in which the gene expression was measured at several time points during maturation, and discovered that the four types of particles represented four consecutive stages of viral maturation. They found that unlike in other viruses, the viral capsid or shell of medusavirus was produced independently in the host cell’s cytoplasm, while the viral DNA was produced in the nucleus. Further, only empty capsids present near the host nucleus could incorporate viral DNA and become s-Full or DNA-full particles. These findings suggested that the medusavirus had a unique maturation process.

To observe the detailed structure of the four types of medusavirus particles, the team used the cryo-EM technique. They found that all the different particle types had a comparable outer structure, with the presence of three different spikes. The configuration of the capsid shell was also consistent with the structure of the membrane layer within the capsid. However, while s-Full and Full particles showed a complete internal membrane, p-Empty and Empty particles had “open membrane structures,” meaning the membrane had a gap at one end.

“Viruses are smart and can replicate and mature in various ways. Our findings reveal the unique way in which the medusavirus matures. The open membranes we observed in p-Empty and Empty particles were particularly interesting. We believe that the membrane gaps indicate an incompleteness and represent a state in which viral particles have not yet matured. The gaps are likely used to exchange DNA and proteins required for medusavirus maturation and disappear as the virus reaches its final stage,” explains Prof. Takemura.

These new insights not only demonstrate a novel mechanism of particle formation and maturation in medusavirus but also shed light on the great structural and behavioral diversity of giant viruses. They represent a “giant” leap in our knowledge of virus biology and call for further research into giant viruses, which could help answer numerous questions about evolution and infection. 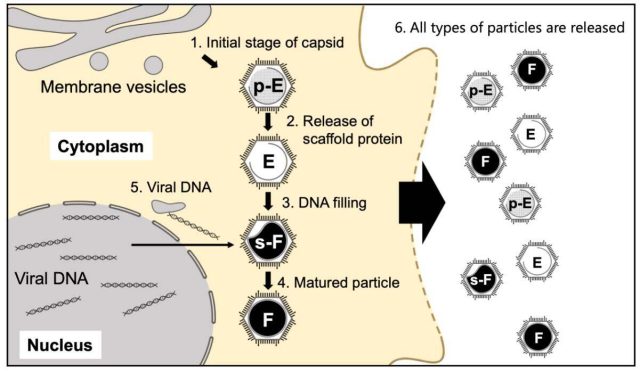 Title: A hypothetical illustration of the maturation of four types of medusavirus particles.

In a major breakthrough in research on giant viruses, researchers from Japan unveil a unique four-stage maturation process of the medusavirus inside host cells. 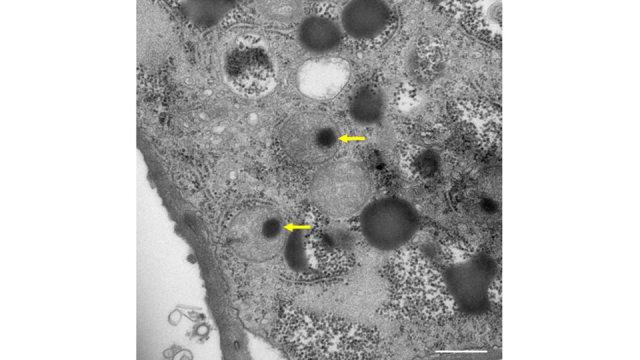 Title of original paper :
Particle morphology of medusavirus inside and outside the cells reveals a new maturation process of giant viruses
Journal :
Journal of Virology
DOI :
10.1128/jvi.01853-21